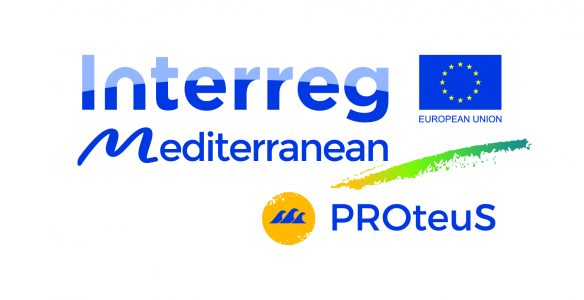 The 2nd Workshop on Dual Use Marine Technologies was successfully held in Larnaca!

The 2nd Annual Workshop on Dual Use Marine Technologies took place from the 17th until the 18th of October at the House of Arts and Literature in Larnaca. Leading marine technology providers, national and international users as well as researchers in the field of marine and maritime technologies shared ideas, provided insight and encouraged synergies towards the protection of human life and natural heritage.

The Mayor of Larnaca, Mr. Andreas Vyras, and the Shipping Deputy Minister of Cyprus, Ms. Natasa Pilides, addressed the workshop participants with opening remarks. They highlighted the importance of bringing together stakeholders from the marine and maritime sectors as well as promoting RTDI activities in Cyprus in support of sustainable Blue Growth and welcomed this workshop as a step towards the right direction.

The first panel discussion addressed climate change, the Cypriot marine environment, maritime accidents and unauthorized activities at sea. This session was moderated by the former Port and Marine Police Commander, Kyriakos Mavris. He led a discussion with these Cypriot government officials:

The panel discussion began with the most pressing issue of our time — climate change — and the practical actions necessary to reduce greenhouse gas emissions. The discussion also touched the issue of the geopolitical implications of Turkey’s latest attempt to illegally conduct drilling operations in the south-west of the island within Cyprus EEZ and continental shelf. The panellists and audience members addressed the likelihood of these drilling operations resulting in an oil spill or natural gas leak. Regarding safety and security at sea, the panellists also discussed how to protect life when refugees are trafficked across the Mediterranean Sea from Turkey and Syria to Cyprus.

Session 2: Developments in Sonar Technology and Use

Dr. Hayes then discussed the sonar applications for Search And Recovery (SAR). A SAR operation three particular stages including search, locate and recover. Three sonar systems are available to conduct a SAR operation — fixed scanning, side scan and multibeam sonar systems. Deploying sonars to locate hazards before committing a diver increases human safety. A Flexview Multibeam Imaging Sonar is like a camera. While utilizing the Stand Alone Mosaic Module (SAMM) Software, the Flexview Multibeam Imaging Sonar stitches together images to create a map allowing scanning large infrastructure such as pipelines and sea walls.

The Vice President of Sales at R2Sonic, Mr. Cris Sabo, delivered a presentationtitled, “Leading Innovators of Bathymetric Systems & Technology”. After engaging the audience with the history of hydrographic surveying, Mr. Sabo discussed various offshore multibeam sonar applications such as cables, pipelines, ports, harbours, key walls, dredging, geological surveys,  wind farm developments, mines, ship wrecks, and after disasters among other applications. R2Sonic has developed the world’s first wideband high resolution multibeam system with selectable frequencies. With Multispectral Mode survey capability, their systems collect backscatter data at multiple frequencies in a single pass which allows the user to glean more information. Mr. Sabo stated that the next generation technology will only be limited by the speed of the vessel carrying the sonar system.

Mr. Kyriakos Mavris discussed the details of the criminal investigation of Cyprus’s first and only serial killer case. The self confessed serial killer preyed on migrant workers and committed the premeditated murder of five women and two girls, the daughters of two of the victims. He disposed of their bodies in a mine shaft and lakes southwest of the capital, Nicosia. The case study focused on the toxic man-made Kokkinopezoula Lake, also known as the Mitsero Red Lake. The open pit pyrite mine was abandoned leaving a large crater. The oxidation of pyrite releases toxic metals and metalloids such as arsenic (As) thus contaminating water that pooled in the crater over the winter months. In addition to trawling the lake, investigators used a remotely operated vehicle (ROV) and multibeam sonar system to locate the suitcases. Divers were then necessary to pull the suitcases containing the victims’ bodies out of the acidic water, bringing closure to the victims’ families. This was a clear case study on how Maritime Surveillance technologies helped the  work of the Cypriot police.

The Area Sales Manager of Kongsberg Seatex, Mr. Vegard Haugen, presented the state of the art in marine interconnectivity with the Maritime Broadband Radio (MBR). After presenting the history of the Kongsberg Group which includes Kongsberg Digital, Kongsberg Maritime and Kongsberg Defence and Aerospace, Mr Haugen detailed the challenges in maritime communication such as destructive interference with flat-sea fading, optimal network topology depending on near versus far communication and obstructions when moving vessels are communicating. To address these challenges, the MBR product line is a reliable, robust and dynamic communication system. The primary smart antenna is designed with up to 60 antenna elements in one antenna panel. This panel enables instantaneous beam forming, tracking and spatial addressing. The phased array radio system produces a fast moving directed beam for long range and high bandwidth that is difficult to monitor and jam. The system features also include outstanding range, stability and bandwidth for non-line-of-sight and beyond line-of sight communications with a 16,5 Mbps payload.

A Researcher at the Maritime Institute of Eastern Mediterranean (Mar.In.E.M), Ms. Sofia Maragkidou, presented the objectives and results of the EU-funded PROteuS project. The PROteuS project aims at exploiting the growth potential of the emerging Maritime Surveillance industry through the creation of a Maritime Surveillance Cluster in the Mediterranean that will promote innovation and R&D activites, knowledge and technology transfer as well as transnational cooperation. The Cluster will involve stakeholders from academia, government, companies and civil society (4-helix approach) from all six countries and will offer customized services to its members. It will be composed of 6 national nodes, each one operating in each partner country. Ms. Maragkidou specified that the project is at the end of the testing phase and at the beginning of the transferring phase. She pointed out that some of the most important legacies of the project will be

Assistant Professor in the Department of Mechanical Engineering and Materials Science and Engineering at the Cyprus University of Technology, Dr. Savvas Loizou, discussed the current tender out for robotics for inspection and maintenance as well as the RIMA network that consists of 13 European Digital Innovation Hubs with a vast experience in the field of robotics.

The Managing Director of Cyprus Subsea Consulting and Services, Dr. Daniel Hayes, presented how the company blends academic and technical expertise with seagoing and survey experience to carry out scientific research, commercial and governmental projects in the Eastern Mediterranean Sea, Middle East, Europe and North America. CSCS specializes in marine robotics and autonomous systems. Since its beginning, CSCS has been serving the public and private sectors with equipment maintenance, rentals and official resales, as well as data collection, analysis and reporting services. The company’s prime mission is to develop, operate and maintain ocean gliders and related services for use in science and industry. Their latest product offerings include the SMART Cable and the DeepEcho Module.

Session 6: Developments in Radar Technology and Use

The President of Helzel Messtechnik, Mr. Matthias Kniephoff, presented two talks titled “HF Radar for Short and Long Ocean Monitoring: Samples of Various Applications” and “Proposal for a Dual Use HF Radar System on Cyprus”.  Helzel Messtechnik designed and manufactures the ocean radar system WERA. It is a shore based remote sensing system using the over the horizon radar technology to monitor ocean surface currents, waves and wind direction. A WERA site layout includes a transmission antenna, linear reception array and an air conditioned container that houses the electronics. From 5.26 MHz for longest ranges to 8.35 or 9.3 MHz for long range to 13 or 16 MHz for medium ranges, the WERA system can be configured to ensure the optimal coverage. WERA systems also include active broadband antennas with dual frequencies along with a range of other techniques. The WERA applications include ocean current maps, wave data – heights and direction wave spectra, drift prediction for SAR, ocean current forecasting for vessel traffic services, tsunami detection and probability and identification of eddy currents. A dual use option with the Helzel OTHR system includes ship detection and tracking. Since 1999, more than 150 WERA systems have been installed worldwide. Mr. Kniephoff proposed a coastal surveillance monitoring system for Cyprus. An OTHR and WERA systems provide:


Session 7: AUVs as Dual Use Platforms

The Professor of ENSTA Paris at Sorbonne Université, Dr. Laurent Mortier, gave a presentation titled “OceanGliders, Glider component of a Global Ocean Observing System: open, interoperable hydrography for multiple users”.  Dr. Mortier presented the glider history within the Global Ocean Observing System (GOOS) which was developed by research centres, public agencies companies and defence agencies. GOOS coordinates provision and open distribution of ocean observations suitable for multiple ocean services. With the large number of devices currently in the ocean, the challenge is to turn that data into information. In particular, glider observations and the information resulting from the data analysis are for societal benefit — from climate change science, real-time security and defence services and ocean health.  From 2005 to the present day, the European Gliding Observatories (EGO) has transformed into Everyone’s Gliding Observatories, a large global community of glider practicioners that have published white papers demonstrating that innovative glider technology helps reduce uncertainties, enhances spatio-temporal sampling of the GOOS and further develops ocean management. OceanGliders is a new associated program of GOOS since glider technology is mature and gliders as a global observing network is transitioning to maturity. The OceanGliders Task Team is building a robust network of glider practitioners.