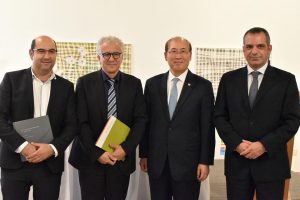 Undoubtedly, the Blue Economy is a source of growth and progress for Cyprus. The Municipality of Larnaka recognizing the growth prospects of the Blue Economy for the island, has adopted a series of actions that fall under the "Larnaka, Blue City" strategy in order to fulfill a two-fold vision: the transformation of the city into a Regional Blue Economy, Education, Training and Research Center and the promotion of the Integrated Maritime Policy of the EU in the area.

This vision will be materialized by creating and hosting in the city -and the wider area of the Larnaka Bay- more Marine and Maritime-related Education, Training, Research and Innovation Institutions as well as Institutions that are active in the Marine and Maritime Sciences and Technology sectors. At the same time, the provision of such institutions with the necessary incentives and infrastructure (as for instance the concession of available state spaces and buildings in the city of Larnaka and the Larnaka Bay) along with the promotion of public-private partnerships will facilitate the realization of such ambitious projects which in turn will increase employment, foster business development opportunities in cutting-edge technologies, strengthen the competitiveness of the Cypriot economy and encourage sustainable growth in general.

In this context, the Municipality of Larnaka in cooperation with the University of Cyprus organized jointly an event on October 10th -in the presence of the Secretary General of the International Maritime Organization, Mr. Kitack Lim,- where they announced the following important initiatives which are expected to alter significantly the Blue Innovation Research and Technology scenery of the country:

During the press conference, Mr. Nick Brown, Marine & Offshore Director of Lloyd's Register (LR), presented to the Mayor of Larnaka and the Rector of the University of Cyprus the LR publication "Maritime Science and Technology", expressing his wish for further cooperation with the new Faculty of Marine Science and Technology to the benefit of the maritime industry. Lloyd's Register (LR) is a global engineering, technical and business services organisation wholly owned by the Lloyd's Register Foundation, a UK charity dedicated to research and education in science and engineering. Founded in 1760 as a marine classification society, LR now operates across many industry sectors, with over 9,000 employees based in 78 countries. Aiming at accommodating the maritime industry's needs in the most effective way, LR has been supporting from a very early stage the efforts of establishing in Cyprus a world class institution that will provide the local but also the international maritime industry with highly qualified human capital and high quality research capabilities. 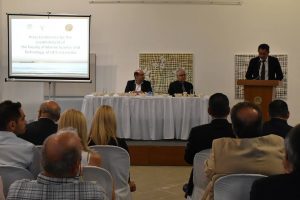 Furthermore, it is worth mentioning that a few days ago, on the 6th of October, the Municipality of Larnaka presented to the public the European program MaRITeC-X, which aims at creating a Center for Excellence in Maritime and Marine Research, Innovation and Technology in Cyprus. In other words, this Center will foster scientific and business excellence in Blue Economy sectors with comparative advantages for the Cypriot economy such as maritime and coastal tourism, merchant shipping, fisheries and aquaculture, including emerging ones, with great growth potential such as offshore energy.

All these actions and initiatives demonstrate the will and determination of the Municipality to contribute to the creation and modernization of the necessary infrastructure as well as to human capital development and jobs creation in the Blue Economy sectors, serving the real needs of these sectors so that they become more competitive and grow even more.

There are no upcoming events at this time.