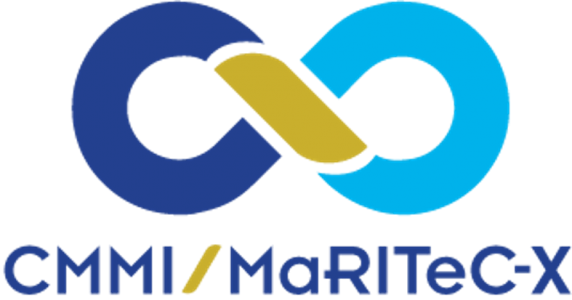 A Cyprus Marine and Maritime Institute (CMMI) event was successfully held on 8 December to present its synergies with the local and international blue community. The event took place at the Divinus Lounge Bar in Larnaca, in the presence of the Institute’s local and international partners, with the participation of representatives of the academic and research community, industry, the public sector and civil society. The flow of speeches was coordinated by Mr. Christodoulos Ioannou, Municipal Councillor of the Municipality of Larnaca.

In his opening address, Dr Stelios Himonas, Permanent Secretary of the Deputy Ministry of Research, Innovation and Digital Policy, referred to the importance of a sustainable Blue Economy and the role that Cyprus is called to play in it, as well as to the contribution of CMMI in attracting talented researchers, creating a network of associates with the academic community and industry, and developing infrastructure. Dr Himonas referred specifically to the challenges of decarbonisation and digital transformation and highlighted the progress of CMMI’s initiative to establish a Centre of Excellence for Vocational Education and Training, as well as to promote ocean literacy. Finally, he noted the establishment of a mechanism to support all Centres of Excellence based in Cyprus by the Deputy Ministry.

On behalf of the Deputy Ministry of Shipping, Mr. Yiannis Typaldos, Head of the Directorate for the Integrated Maritime Ecosystem, referred to the importance of establishing CMMI for research and innovation in the maritime industry and in the local, regional, and international dimension of shipping. He noted the — recently launched — long-term strategic vision for Cyprus Shipping “SEAchange 2030” and the specific strategic objective for the development of a research and innovation environment through the utilisation of financial instruments and programmes and the development of an appropriate culture in all the components involved. Mr. Typaldos underlined the consistent and continuous support of the Deputy Ministry, as well as the good cooperation between the two Organisations and, finally, congratulated the leaders and all actors for the achievements of the CMMI.

On behalf of the Ministry of Energy, Commerce and Industry, Mr. Konstantinos Karageorgis, Director of the European Affairs Unit, referred to the New Industrial Policy 2019-2030 which aims to create a robust, flexible and smart industry, which will contribute to the growth and competitiveness of the economy and open up employment opportunities for young people, emphasising the 4th Industrial Revolution and the importance of developing appropriate skills in the workforce to respond effectively to the new demands. Mr Karageorgis also referred to the Memorandum of Cooperation signed by the Ministry and the CMMI noting the two CMMI initiatives for the creation of the Centre of Excellence for Vocational Education and the Cyprus Research Hub on Decarbonisation.

Mr. Andreas Karakatsanis, Chief Engineer at the Municipality of Larnaca, addressed the meeting on behalf of Mr Andreas Vyras, Mayor of Larnaca and Chairman of the Board of Directors of the Institute, stressing the important contribution of the CMMI to the intended transformation of the city of Larnaca into a Regional Centre for Research, Education and Training for the Blue Economy and acknowledging the positive impact of CMMI initiatives to address the challenges in the marine and maritime sectors and related social demands. In closing, Mr. Karakatsanis referred to the commitment of the Municipality of Larnaca to continue its support to the CMMI, which he characterised as a dynamically growing hub in the city of Larnaca with the prospect of developing soon into a major cluster for research, innovation, and technological development.

The event then focused on the progress and work of the Institute during the two years of its operation. Mr. Zacharias Siokouros, CMMI CEO, emphasised the research initiatives and outreach activities of the CMMI, the laboratory infrastructure and facilities and the network of active partners and associates, underlining that these bode well for the further development and evolution of the CMMI. Mr Andreas Karakatsanis, in his capacity as Chief Operations Manager, referred to the interdisciplinary nature of the Institute’s research and administrative staff, as well as the timetable for the construction of the new premises. Mr Damon Teagle, Professor at the University of Southampton (UK) and Chief Scientific Director of the CMMI, initially referred to the global challenges related to climate crisis, global warming, ocean pollution and endangered biodiversity, and then linked the challenges to the CMMI structure, research teams, the Institute’s ongoing and planned projects, underlining its potential and prospects. Professor Teagle referred in particular to the Institute’s initiatives on decarbonisation, digital transformation, robotic and autonomous systems, optimisation of ship behaviour, smart artificial reefs, monitoring of the marine environment and marine health indicators, tackling invasive and endangered species, training in blue economy professions and ocean literacy.

The event ended with a roundtable co-ordinated by John Breslin, Managing Director of BlueWise Marine (Ireland) and Chief Executive of Commercial Activities and Innovation. The participants were Mr. Alexandros Iosifidis, Deputy Director General of the Cyprus Chamber of Shipping, Mr. George Pagiatas, Officer at the Department of Artificial Reefs of the Department of Fisheries and Marine Research, Ms Anna Maria Christoforou, Scientific Officer A of the Research and Innovation Foundation, Professor Nikolaos Ventikos of the National Technical University of Athens, Professor George Georgiou of the University of Cyprus, and Ms Niki Karoulla, President of the (NGO) Active Zone Outdoor.

During the discussion, participants answered questions from the coordinator and expressed their views on the possibilities and prospects for cooperation with CMMI. Mr. Iosifidis referred to the problems facing global shipping, adding that CMMI can assist with its research in reducing the environmental footprint and improving the efficiency of maritime transport because it benefits by having a close relationship with the relevant industry, with which it already cooperates on projects of mutual interest. Mr. Pagiatas referred to the Institute’s cooperation with the Department of Fisheries and Marine Research for the creation of the artificial reef in Amathus with elements of special pro-environmental concrete that will be “printed” in a special 3-D printer, as well as other programs and actions of ocean literacy. He also added that the Department intends to assist with its capabilities and accumulated experience to the enthusiasm and zeal of new CMMI researchers and scientists. Ms Christoforou underlined the important role that Centres of Excellence can play in commercialising research findings, shaping a culture to promote innovation and linking the research community with industry and stressed that the Research and Innovation Foundation supported all proposals submitted to Teaming by providing know-how and guidance in the drafting of proposals. She noted, in particular, the potential of CMMI due to its activities in the marine and maritime sectors and, in conclusion, she stated that the Foundation is planning the creation of a Knowledge Transfer Office to support the academic and research institutions of Cyprus in relation to the protection and exploitation of their research results and intellectual property rights generated through research and development activities. Professor N. Ventikos, having briefly mentioned his research interests in the School of Shipbuilding Mechanical Engineering, praised the excellent cooperation of the CMMI with all the institutions, the shipping industry, universities, ministries, and government departments, which demonstrates in practice the recognition, acceptance and support enjoyed by CMMI. He stressed that there are important opportunities for joint actions with the Institute. Professor G. Georgiou highlighted the potential of the development of the Cyprus Marine Observation Network of the CMMI in relation to the interests of the Oceanographic Center of the University of Cyprus, which he manages, stressing that there is a fruitful collaboration with CMMI executives in the research field, which began before the establishment of the Institute. Ms Karoulla referred to social transformation, linking with civil society, raising awareness among young people, organising programmes on physical and mental health, re-approaching the natural environment and, in particular, the marine environment, career guidance and the promotion of skills suitable for blue professions, as well as the valuable and productive cooperation of Active Zone Outdoor with the CMMI. To sum up, John Breslin thanked the participants and underlined the value of the synergies of the CMMI and the actors that are in any way active in the sectors of the Blue Economy.